The Petroglyphs: Fact or Fiction?

Petroglyph: |ˈpetrəˌglif| (noun) a rock carving, esp. a prehistoric one.
With that definition in mind, I take you to the petroglyphs.  Yes, a more exciting adventure for you... and myself!
Since darkness was approaching that day, I hopped on Aaron's ATV and gunned it (at 30 mph) up the hill to the site.  That was my first time taking that beast out on my own.  I can honestly say, I now realize why people tool around on those things.  Although, if time permits, I prefer to pedal my bike.  It's much quieter.
Surprisingly, I found the site with ease.  It's been just over a year since I was there last, and that was my first time.  My memory hasn't failed me yet!
I should say this about the petroglyphs: they are supposed to be a secret.  The Michigan Nature Conservancy doesn't want anyone to tamper with them let alone tell their friends (or blog readers on the internet!)  I hope the Nature Police don't show up at my door after this!
But I do respect that, and I won't tell you where they are.
As I walked around, I tuned into my intuition to try to remember where the carvings were.  I was looking for two that looked the most authentic: the bear and the boat.
While walking around for a couple minutes, a shiny thing caught my eye.  Is someone bringing car parts out here I wondered?  This shiny thing was also in the area where I remembered the sailboat being.  When I approached it, I realized what it was.  I would assume an effort of conservancy bolted this glass shield over the top, so nobody could mess with it.  It doesn't really make for good photography, though. 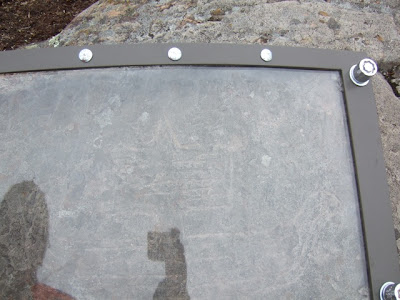 If you look at my reflection first, you can see that my camera hand is right over the mast of the ship.  Above my camera is the sail, and all below over to my head is the hull.  Kinda cool, huh?
Another neat thing I found out there was a little spring coming up through the rocks.  Now, these rocks were elevated enough, so to see water running down from them was quite a surprise.  But I don't know much about that stuff, so I simply took it as an observation to share with you (and a source for fresh water if need be!).
While channeling my inner guide, I was lead to the bear.  Once you're up on the rock, it's hard to find this one... the conservancy didn't.  Here it is in all its rock glory. 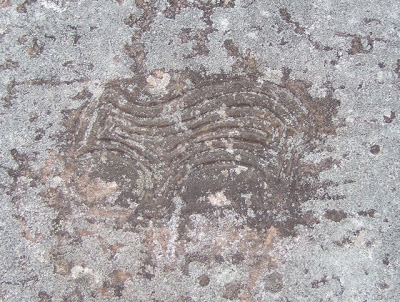 Pretty neat, huh?  This one was just like I left it.  They say it's a bear.
They also say these carvings are from thousands of years ago, when the water was much higher -- hundreds of feet.  It is really amazing to chew on that, and imagine what those natives saw and did around at that time.
I have also heard, however, that a couple old boys back in the 1970's carved those in.
Either way, they are neat works of art.  I see many little trails from all the people who have visited there, checking out the wonders of ancient man.  You can decide what you believe.  I know what I think.
Though I can't tell you where I was, on my way home, I saw this view. 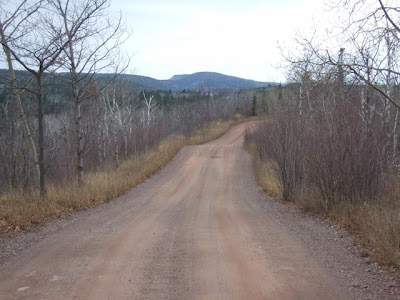 Pretty nice for the end of the earth, hey?
Posted by Amanda at 4:37 PM 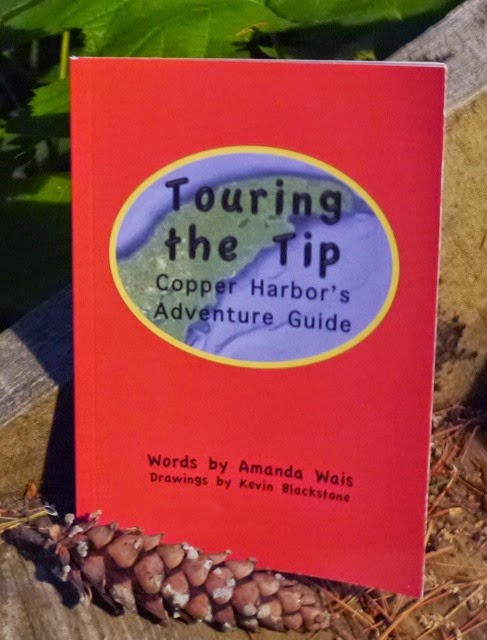